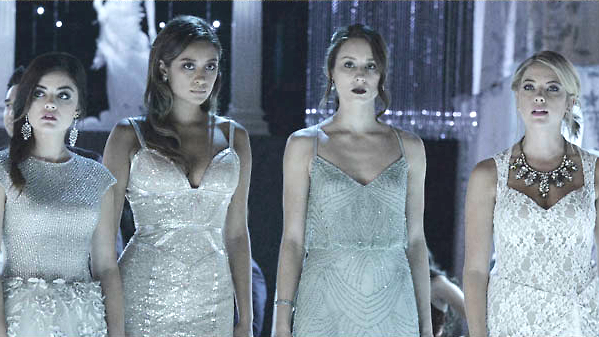 Pretty Little Liars has had us on the edge of our seats for years. All we are asking for is the answer to who is behind that one little letter. To anyone who was disappointed in their lack of a Halloween episode, this Christmas episode came through to give fans a quick fix of the Liars. Don’t be fooled by holiday theme, this episode was packed with the usual mystery and suspense of the regular season.

After the “Fatal Finale”, we were left with more suspicion of Ali than ever before. Before Mona’s untimely death she assured the girls that she had proof Ali was A,  but A got to Mona before the girls could.

Mona’s ghost visits Ali: In a sort of A Christmas Carol style, Mona comes to take Ali to her past. Little Alison is shown playing the piano when she suddenly discovers two presents were hidden inside the piano. She takes them out to discover two identical dresses. When her mom finds her she makes Alison repeat that she only saw one dress, because “daddy would leave them” if he found out. Who was the other dress for? Is it connected to Bethany? Does Ali actually have a twin? The scene ends with Ali asking Mona if the other dress was for Bethany, but per usual all we get is more questions. Ali arrives at the Ice Ball with her army: Sydney and Jenna reveal to Emily that the only reason they are working with Ali is because they are scared of her–and they think she killed Mona. Whether or not they are trustworthy is always a mystery but, nonetheless, Ali comes prepared. Cece Drake also makes a brief appearance, warning Ali that her “former friends” are starting to become suspicious.

Everyone’s relationships seems to be working out: It’s not secret the liars have had their fair share of relationship drama in the series. But in this Christmas special, all of the girls have their S.O. by their side.

Hanna goes relatively unharmed, despite A showing up with a knife: While she’s searching for evidence, Spencer is playing a deadly game of hide-and-seek with A. After breaking a frame to create a makeshift weapon, Spencer goes to find Hanna only to find her knocked out, and A has already escaped through the window.

Ali gets a deathly scare: Mona’s ghost returns to give Alison a glimpse of her grim future. We see Ali in a casket and get a brief visit from her mom again, apologizing and warning “They’ll be coming for you?” But who are “they”? And is this really what they have in store for the girl who’s already returned from the dead once before?

Christmas resumes: A snow storm separates the girls from their families, but they still managed to make a beautiful Christmas dinner. The episode attempts to end on a more optimistic note filled with holiday cheer. But what would PLL  be without a classic note signed, “-A” to close out the night?

This Christmas special only gave us a taste of what’s to come. While we are dying to know who killed Mona, the winter season premiere less than a month away. You can tune into the new season on Tuesday January 6th. But after the teaser that followed the episode, it’s guaranteed that this season will keep us in suspense until the very end.

What did you think about the PLL Christmas special? Was it everything you expected? Or did you like the Halloween specials better?