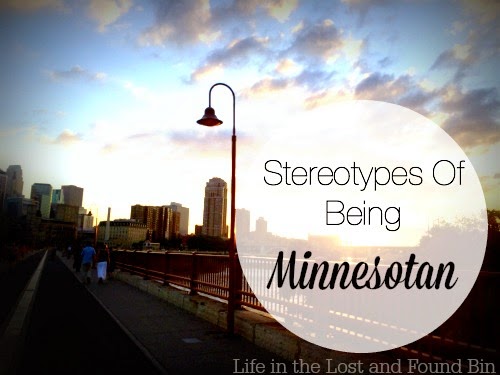 I am a midwestern. But to make it even better, I am from the land of 10,000 Lakes (Or around that. Who’s counting anyway?). If you aren’t from the Minnesota, you might have an idea of what a typical Minnesota looks like:

Am I close? There have been many times in my life when I have met someone who has never been to Minnesota who has had a humorous idea of what Minnesota is really like.

So you like live in the middle of nowhere, right? I’ve heard it’s all farm land and cows poop everywhere.

First things first, in what world would there be cows going around doing their business where ever they please? That’s just gross and unsanitary, and why would you ever think that would be unacceptable anywhere? Secondly, ever heard of Minneapolis? While it is much smaller than Chicago, and much much smaller than NYC and LA, it is hardly farm land.

We don’t live in Antartica.

I will not say “Boat”. So maybe I pronounce certain words a little different than you–it’s not like the rest of the world except Minnesota has the same accent and dialect.

It’s actually a drinking fountain. So this one is specific to a West Wisconsin region, but since I go to school in Wisconsin I hear this quite a bit. This only originated because of good branding, like how we call a tissue a “Kleenex.” More here.

Fall is finally here!! 🍂🍁 who else is so pumped that leaves are starting to turn?!
Fall ✨mornings✨ are my favorite 🍂🍁
📣 BIG NEWS 📣 FREE SHIPPING IS NOW AVAILABLE!!