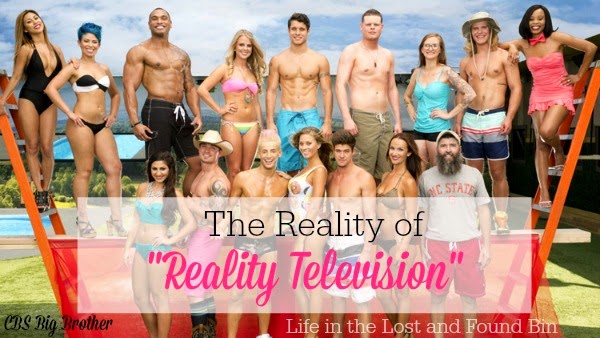 Oh, Reality TV. There are two types of people in this world: those who are obsessed with Reality TV and those who detest it.  Let’s be honest: whether or not you like it, many people have a love-hate relationship with Reality TV. And by many people, I might just mean myself, but I have a feeling I am not alone in this. Part of it is because of the very reason we enjoy watching TV in the first place: we like watching other people do interesting things. After a long day, it can be nice to unwind by watching others and living vicariously through them–whether they are real people or fictional characters in your favorite sitcom.
But Reality TV takes it to a whole new level, because we are watching real people do ridicilous things. If they were doing things normal people do, they would have no viewers. Who wants to endure watching other people do errands or watch TV? Why do you think The Office was a fictional hit instead of a reality show? Nothing that comical actually happens in an office on a regular basis. (I mean I am not in an office on a regular basis–but if an office like that exists those people should work on getting their own show. Or maybe new management is in order, preferrably not in the form of Will Ferrell, cough, cough.)
Anyway, do you ever find yourself shouting at the television for someone to stop opening their big mouths on secret alliances because this is Big Brother and you never, ever, trust people–especially in the first week of the show? Ok, maybe that one is just me. But if you have ever watched reality television, against your better judgement, you have gotten more invested then you ever intended. Every week you tune in, telling yourself this will be the last time. Just put down the remote and back slowly away from the TV. Whether your guilty-pleasure show is The Bachelor or Jersey Shore (That’s not actually on anymore, right?), you know it is wrong. So wrong. Spoiler alert: They break up, and Snooki’s hair is still higher than her IQ.
So why do we do it?
Maybe it is because we are creatures of habit. Or maybe, just maybe, it is because the ridiculousness that we bash with friends and colleagues, is just more exciting than watching real people do normal things. Last time I turned on the TV I didn’t spot “America’s Next Top Blogger” in the TV Guide (which is a shame). I can’t see them making a “Survivor: Poor College Kids Edition” any time soon. And “16 and on the Honor Roll” doesn’t have the same ring as 16 and Pregnant. We don’t want to watch normal, because we are terribly normal. Reality TV is somewhat (sometimes more than ‘somewhat’) staged, and if there are new people every season, they pick the people with the most outrageous personalities. They want drama. They want scandal. They want viewers.
My guilty-pleasure show is Big Brother. It’s a show where a group of 16 or so people willingly cut themselves off from the outside world and compete to stay in the House for two-and-half months. Oh yeah, and the house is full of cameras and microphones, and it is nationally broadcasted. The photo above is from the current season, Big Brother 16. Yes, there has been 16 seasons of betrayal, deception, and half-naked men (and women–but look at all those abs. They stand out). But it get’s worse. I have a confession: I have always dreamed of being a Big Brother contestant, but I am not old enough yet (contestants are 21+–two more years!). I know, I know. Why would I want to engage in this kind of behavior on national television? Week after week, people lie to each other, form alliances, and vote each other out. Yet, I have been watching this show since I was 5, and at times I even fantasized about what it would be like if they created a kid version. It’s sad, really. But here’s the thing: the grand prize is $500k. Do you know how many times I could pay off the college debt I am currently accumulating? It’s not all about the money, though. Like I mentioned, I have been watching quite a while. After 16 seasons, I would like to think that I know the game pretty well. But show’s motto is “Expect the Unexpected”, so who knows what it would really be like.
Mostly, I think at this point I am just really curious about all of the behind-the-scene details. What does the diary room look like to the House Guests? What do the House Guests do while the Big Brother people are setting up for a competition in the backyard? Is drama ever staged? What does slop really taste like (slop is the punishment food for the “Have-Nots” of the week, apparently it looks like oatmeal but tastes so foul some people barely eat those weeks). Ok, maybe I don’t need to know what slop tastes like. But I have a lot of questions.
The next time you sit down to watch your guilty-pleasure show, maybe you will think about this post again and reevaluate your life priorities. To become a world famous novelist in my spare time or to watch a broken-hearted hunk from The Bachelorette find “true love” as The Bachelor? And inevitability, you will tune in again next week, because we live in reality. And no one has time to write the next Harry Potter when The Bachelor: Women Tell All is up next.