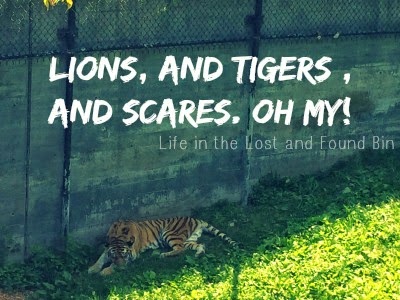 Zombies don’t scare me. Alien invasions, Bloody-Ghost-Brides, and Werewolves don’t have me hiding underneath the covers. I can handle a scary movie or two. But if you walk in the room announced, I will scream. It’s not even a “late at night” or “during thunderstorms” kind of thing. It’s a “middle of the day” or “sunny day” kind of thing. I am just very easily startled.

I don’t know if I should even be telling you this, because many times people find out and like to play on it. A few of my friends at school would purposely come up behind me and scream until I jumped out of my chair. Most people would jump if they are being shouted at! But they learned to do this because they would walk into the den without saying a word and I would jump off my chair. If I am “in the zone” I guess I shut out the world around me and become extra sensitive to outside stimuli.

One of my friends even walked into our lounge while I was alone and decided to blow some horn he had in his room and just walked away laughing. They get a thrill out scaring me.

About a month ago at work I was doing the dishes in the back when my manager walked into the back and “meowed”. Let me explain that last part: well, actually, you would have to meet him to understand. But I promise it’s not as strange as it first sounds–or maybe it is, and I am just used to it, because he is just an all around funny guy. I digress, the point is that I turned around and screamed because I had been so engrossed in doing the dishes. And just as I was writing this he walked by* (because I am in the Starbucks right next to my work), and he managed to startle me without even being in the same place. We both just started laughing through the window, reveling in the ridiculousness of my ability to be startled.

Sometimes at home by brother will just walk into my room, and I will jump. Other times he will knock first, and somehow I am still surprised when he enters. It’s a problem, I know. But what I am supposed to do? I try to make myself more alert to my surroundings, but it’s really easy to get lost in my own thoughts or whatever I am doing. At least I keep things interesting for those around me; my startled-ness always provokes laughter in those who witness it.

*When I say he “walked by” I literally mean he just walked by, saw me and was shocked to see me as he was just casually glancing into the coffee shop. He didn’t try to scare me in any way. There was mutual surprise (maybe more than there should have been on my part seeing as I am next-door to my work).

I have good and bad news.
Anyone else have a fall bucket list??
Fall means…