Start typing and press
Enter to search
Skip to content
Full disclosure: there are multiple people I could call best friends. But there is only person that I can say is the Best Person I’ll Ever Meet.
She’s the first friend I made when I came to Pilgrim Lane Elementary in April of first grade. She’s the one that knows all of my secrets and aspirations. She’s the one that I can always count on.
I don’t know if we would become friends if we met today. Part of me says that of course we would become friends because we are best friends. But we are also such different people that we probably wouldn’t be as close as we are now if we hadn’t known each other for nearly ten years.
Meet Grace: 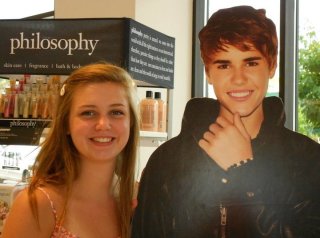 Favorite Color: Purple (Like JB)
Favorite Guy: JB (And Zac Efron. And that guy Liam from One Direction. The List could go on)
Animal: Kangaroo (She still has one that I drew her on her wall in her room from 8th grade)
Talent: Fashion—She is the best dressed girl at her high school. Without a doubt.
Sport: Cheerleading
Miscellaneous: She is the best friend anyone could ask for.
Despite our differences, being best friends has made us more like each other. Being friends with her has made me more girly. And she told me that being friends with me has made her a better person. She said, “I think I would have been a trouble maker, but you are such a goody-goody.” It was the first time I was ok with being called a goody-goody. She’s also the only person over 5-years-old (that isn’t a member of my family) allowed to call me Tay-Tay. You make exceptions for the people you care the most about.
For the past ten years we have been able to tell each other anything and everything. It’s almost like we’re married. Through sickness and health (and many stupid boys) we have always been there for each other. We really do have a best friend kind of marriage. We’ve already planned our lives together.
We will live in Medina but have large boats on Lake Minnetonka. We’ll have a boat for the day time and a boat to have parties on in the night time. We will live next to each other and at least one of us has to have a porch. In our twenties, we will both have great careers. Then will settle down and have kids. And they will be best friends too. When we are in our eighties, our husbands will be inside yelling at the TV, and we will be on the porch.
We have the future all planned out, but our past is just as much a part of our story as will be our future.
Our Playlist:
Meeting Grace was one of the best things that has ever happened to me. As she likes to remind me, I think everything happens for a reason (Don’t take that too literally). What I mean is that I believe in serendipity. And meeting her was the greatest serendipitous moment of my life.

I hope you know you can always Count On Me.
“Sometimes in life there really are bonds formed that can never be broken. Sometimes you really can find that one person who will stand by you no matter what. Maybe you will find it in a spouse and celebrate it with your dream wedding. But there’s also the chance that the one person you can count on for a lifetime, the one person who knows you sometimes better than you know yourself is the same person who’s been standing beside you all along.”
(A quote from Bride Wars that describes our friendship)